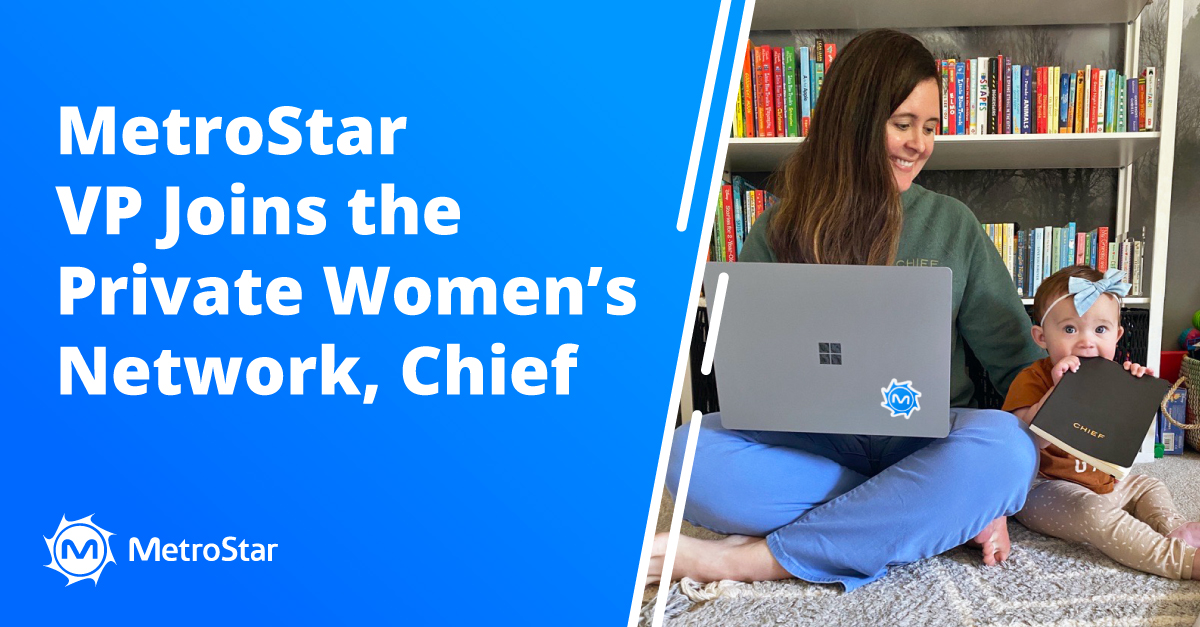 As Shania Twain once said, "Let's Go, Girls!" Chief, a women-based private professional network, is designed for women in the C-Suite, senior executives, and accomplished vice presidents to strengthen their leadership, magnify their influence, and pave the way to bring others with them.

Only 25 percent of women in America hold executive-level leadership positions with even less in the C-Suite. The Chief network aims to alleviate that underrepresentation by cultivating a positive network environment for women leaders.

"Chief feels warm and authentic. It feels like the group is lifting others up," Brush said. "When I started at MetroStar, I knew I wanted to promote other women to roles they wanted and deserved. That means hiring more diverse people from the start. Chief is opening my network for that."

Members of Chief must meet the basic criteria for an interview, including having 15 plus years of experience and working in a leadership capacity at their company. "The interview process for Chief felt more like a conversation. They made me feel welcome from the start."

A Place for Women Leaders to Connect and Learn

Brush became a manager relatively early in her career and attributed that growth to the mentors who pushed her and gave her a sense of purpose within leadership roles. She hopes to be that kind of mentor to others.

"I was working hard, but the stars also aligned. My mentor promoted me with a great title at a young age. Coming into that role early, I learned a lot of things that grounded me. I saw what kind of leader I wanted to be, including the need I had to take care of the people around me. You have to know what drives your people and be there to advocate for them."

Chief is a diverse network and allows women to gain different perspectives from those in varying industries.

"Hiring diverse candidates to your company only helps you in the long run. It gives you new perspectives, drives innovation, and brings people with different experiences to the decision-making table," Brush said. "My network largely includes government and technology individuals, but Chief will expose me to leaders in different industries who may approach problems differently than I would because of their different experiences.”

Leading Change and Motherhood in Government

In 2020, three mothers at MetroStar, including Brush, found they were living in similar environments as they navigated work and motherhood during an ongoing pandemic. They knew other women in the industry would relate to how they were feeling—frustrated with a desire to be heard. The trio knew there needed to be a space to discuss their stories on a larger scale.

As a result, the women launched a now annual panel celebrating International Women's Day (IWD). The MetroStar-sponsored panel brought together women from the industry to discuss their stories and give advice on how they navigate their everyday lives and career.

"Many of the women supporting our IWD Panel had really little kids. I felt like I had such a strong support system because of that. We were able to help each other behind the scenes in being parents and leaders," said Brush. "We wanted to raise this issue on a public platform and have an authentic conversation."

Serendipitous parings that led to MetroStar's IWD Panel remind Brush why she dedicates time to creating workspaces with strong maternal policies. In the past, she has worked closely with MetroStar’s People & Culture team as they advanced and diversified the company's maternal leave policy.

The pandemic has shown how important maternal leave and being an advocate for parents is for companies. Nearly two million women left the workforce for these reasons and more in the past two years.

"Maternity leave and having those corporate conversations are vital. Women, in general, are so important to the Nation’s economy. Then you think of that subsect of working mothers, who have even higher purchasing power and impact on the economy," Brush said.

Navigating work, leadership, and motherhood is a study in relentless prioritization and honing one's ability to continuously respond to change.

"Life moves so quickly," Brush said. "I am where I am because I asked for opportunities when I saw them. I had people take bets on me because they saw me working hard. Be bold in measured ways and push yourself out of your comfort zone."

MetroStar is growing our leadership team. Want to work with like-minded leaders?

Generalist, Specialist, or Explorer: Which is Better to Build a Career?