Two MetroStar employees, Mike Ohleger and Jessica Alley, share a passion for the running non-profit wear blue: run to remember. This passion led to their greater involvement in the organization, and they helped MetroStar become a corporate donor for the group.

Merriam Webster lists multiple definitions to describe the word passion. One is, "an intense, driving, or overmastering feeling or conviction." When a person has drive and conviction for something greater than themself, they often find themself brimming with passion. When we meet these people it’s not uncommon to have their passion trickle down to others.

Mike Ohleger, Program Manager, and Jessica Alley, Business Analyst, are connected by more than their roles at MetroStar. They both embody what it means to be passionate through their work with wear blue: run to remember—a national running community that honors the service and sacrifice of the American military.

In 2011, Jessica Alley knew she had found a community that was making an impact on people’s lives. Growing up in a military family, she had strong ties to the military community, so when her sister encouraged her to attend a wear blue running meetup she obliged (Spoiler: she was not a runner).

"I hated to run, but I thought this was a place I needed to be. After I went to my first run, I was already hooked on the mission (maybe not the running just yet) and ready to be more involved," Alley said.

"I had just gone up to the booth to buy a long-sleeve shirt because it was going to be cold that day. It wasn't until my friend pointed out the photo that I realized it was me, and we started talking about wear blue and its impact,” Ohleger said. “My first exposure to wear blue was actually at the San Francisco Marathon around mile 8 or 9 when I saw all of these posters of the fallen. I was still on active duty (Mike served in the Marine Corps), and I wondered how I could get some of my buddies on the posters. It all feels more personal to me, as I was on active duty, I've lost friends, and these moments have a major impact on me."

Mike started to volunteer his time to wear blue and is currently working as their Social Media Coordinator. Through another act of fate, the pair both started careers at MetroStar, and their shared passion for wear blue led to MetroStar becoming a corporate donor. 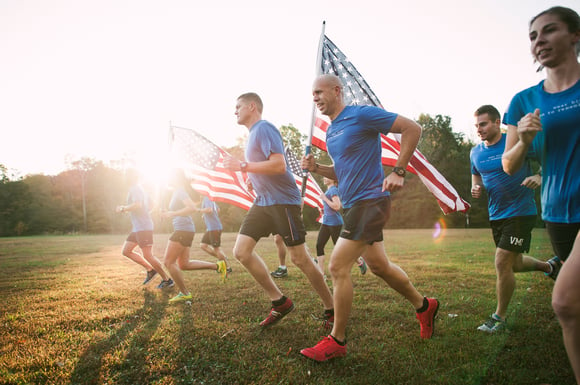 "I learned about the CARES program [Collaborative Action of Responsible Employees for Society] at MetroStar, and I brought up wear blue to the leadership team. I asked if MetroStar would be willing to donate money to the cause, and they ended up donating money for the 2019 Marine Corps Marathon race vehicles," said Ohleger.

Since 2019, MetroStar has been involved in donating time, money, and resources to wear blue. One tier of the CARES program is to thank the veteran communities for their sacrifices. MetroStar backs missions that support both service members and essential workers.

Finding passionate employees does not always mean a passion for just their work, but also seeking out those who are making an impact in the community around them. Connecting your company with your outside passions is one way to merge your worlds and communities. Ohleger was ecstatic to have MetroStar help an organization he wants to see succeed.

"Let them [your company] see an organization in action. Have them meet the community and see what it means to the people who are passionate about the work and mission," said Ohleger, "wear blue tends to sell itself once you know what it's all about."

"We are all called to do something. Whether it is professional or personal, I think finding ways to help our communities is something we all should be trying to do," Alley said.

To many, wear blue is more than a community connection. "It's powerful to see the passion tied to our programs and the way we can amplify people's stories," said Alley. "People use running as a healing process or a way to cope with deployment. These programs give them additional resources for their needs.”

Over the last few years, what started as a running support group for channeling the heartbreaking tolls of deployment has become something much larger.

"I was just sitting with the co-founder, and we have been amazed at the growth of wear blue," said Alley. "I wish people understood the organization is more than just a race or one event. We are for the fallen, the families, and those currently fighting, which is encompassed through our six different programs."

"wear blue is all-encompassing. It brings together a large community and I would love to see it continue to grow. There isn't a place I have gone for a run in a wear blue shirt where it's not noticed by at least someone, which is awesome," said Ohleger.

The group continues to outpace (a running pun) their recent events and find new ways to engage the communities they have built over the years.

This past Memorial Day (May 31, 2021) was a first-of-its-kind event for wear blue. On top of their national living memorial campaign, which had around 8,200 runners involved, wear blue members also attended the wreath-laying ceremony at Arlington National Ceremony.

"We took about 75 people to The Tomb of the Unknown Soldier, and we were able to hear the President speak. It was really meaningful to listen to the Presidential remarks while surrounded by Gold Star members, wear blue staffers, and corporate donors [including MetoStar]," Alley said.

As wear blue continues to grow nationwide, they encourage everyone to join their programs, volunteer their time, or donate to the all-volunteer-based organization.

"If someone wants to get involved, you can run, walk, power walk, volunteer, or do whatever you need to do. No matter where you are or what your skill is, if you come out to honor the fallen and the fighting, then you'll be given a warm welcome," Alley said.

Visit the wear blue website for more information and ways to donate. 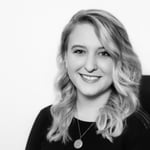 From Designer to Developer: Lessons Learned During a Career Change

Why Every Government Agency Should Update to Drupal 9